From CoGepedia
(Redirected from Fractionated)
Jump to: navigation, search 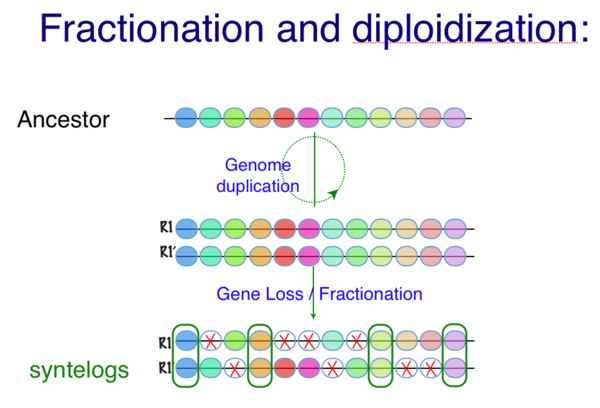 Cartoon of fractionation following a genome duplication event. Colored circle represent genes along a genomic region. Following a genome duplication, all genomic content including chromosomes and their underlying gene content is contemporaneously copied. Over evolutionary time, many duplicate genes (but not all) are lost from one homeologous region or its partner region. This returns the overall gene content of a genome to one that is more similar to the pre-duplicated ancestor, but the overall genomic structure has changed drastically. Genes that are retained in duplicate can be used to detect synteny by their collinear arrangement in two or more genomic regions. 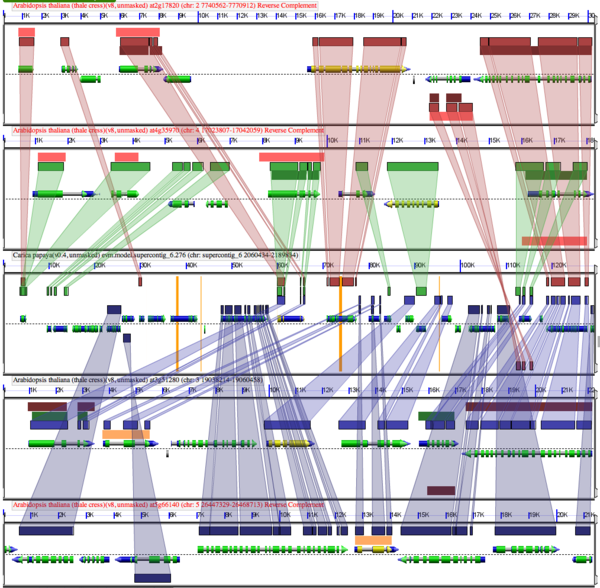 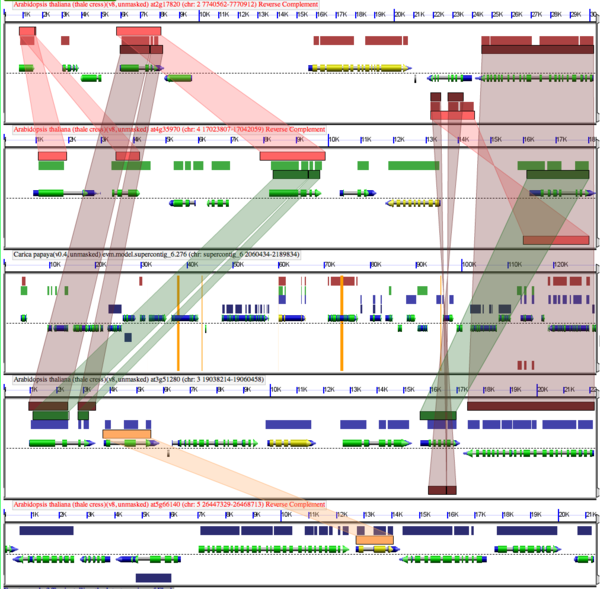 Same example GEvo analysis as above, but with retained genes in Arabidopsis highlighted.

High-resolution GEvo analysis of a genomic region from sorghum and its two orthologous syntenic regions from maize. The sorghum region is the middle panel. Notice the strong pattern of collinear homologous genes between sorghum and both maize regions, while the maize regions only share two homologous genes with each other. This is due to the process of fractionation following the maize-specific whole genome duplication events. Results can be regenerated at: http://tinyurl.com/ydbbyeu

Following whole genome duplication (WGD) events, fractionation is the process of gene loss from one homeologous genomic region or its partner region. Over evolutionary time, this returns a genome to its diploid state in terms of overall gene content. Thus, fractionation is part of the diploidization process. However, the overall structure of the genome will be vastly different as genes are lost from one homeologous region or the other, resulting in genes having different neighboring genes. Also, some families of genes are retained preferentially following WGD events.

Fractionation is a natural process where genomic regions that contain genes, regulatory elements, or other genomic features are lost over evolutionary time. This process is especially prevalent in plant genomes with a history of polyploidy events. After the duplication of a genomic region, or the entire genome as is the case with tetraploidy, most of the duplicated genomic features are lost from one homeolog or the other. This is assumed to happen because there is generally no selection for the retention of these features in duplicate. (However, it is important to note that there are several classes of genomic features that are selected to be retained following genome duplication events. As example of such a class are transcription factor genes.)

When conserved noncoding sequences (CNSs) are fractionated, this is evidence that the cis-regulation of their nearby genes is being subfunctionalized. Since the regulatory function of CNSs is inferred, we do not know how they may be regulating gene function (e.g. enhancers, repressors).