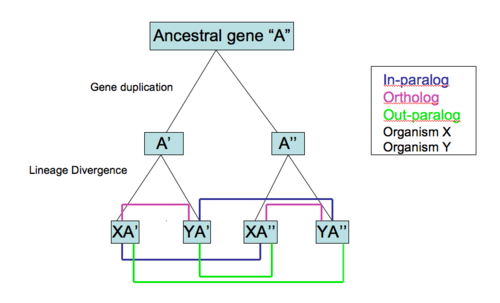 Pair(s) of homologous genes shared between two species, but with a special evolutionary relationship. These are paralogs derived in the common ancestor of the two species. These gene may have sorted in different species through the loss of the reciprocal partner. In the figure shown, gene pairs XA'-YA" and YA'-XA" are out paralogs (in different species, and derived from a more ancient shared duplication event). For reference A'-A" are paralogs (duplicated in the same genome; no other genome for comparison), and XA'-XA" and YA'-YA" are in-paralogs, which is the same as being paralogous in the classical sense.