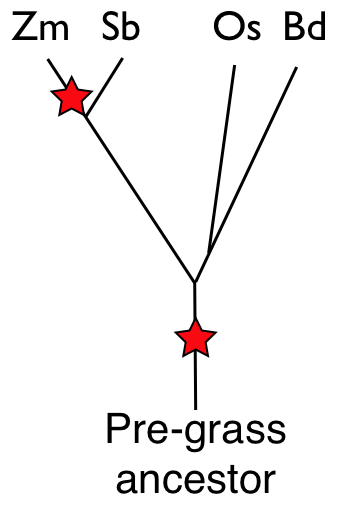 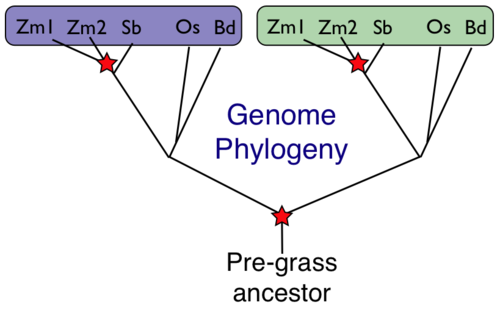 The grasses, a family of plants known as the poaceae, can trace their lineages back to a common ancestor that probably lived between 50-70 million years ago, either right before or soon after the extinction of the dinosaurs(dinosaurs didn't eat grass). Since their emergence in the fossil record, the grasses have been extraordinarily successful, becoming one of the largest families of plants on the planet and covering vast swaths of the planet in the form of prairies/savannahs/steppes.

Grasses play a particularly important role in supporting human civilization as either three (rice, wheat, and corn/maize) or four (the same three plus sugar cane) grass species provide more than half of all the calories that feed the worlds population[1], and are the focus of much applied and basic scientific research.

Because of the comparatively recent radiation of the grass species[2], it was possible for us to use synteny to identify genes and genetic regions in grasses with sequenced genomes that are all related by common descent from a single ancestral sequence in the common ancestor of all living grasses.

For more on this fascinating and vital family of plants, pleas see this site by Peter Stevens from the Missouri Botanical Gardens.