Synteny: Getting the Big Picture

Objective:  To have you learn about Syntenic Dotplots while generating one. 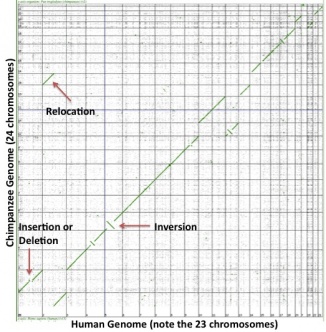 -  Note:  Very powerful computers are needed to compare the genomes against one another, and remember that each genome is over 3 billion basepairs long.  Luckily once two organisms have been compared to each other, the computers save the result so that the next person to compare the same organisms does not have to wait for the analysis to run.  It may take hours for Synmap to generate a syntenic dotplot for humans and chimpanzees the first time.

4.  The new window that pops up is your syntenic dotplot.  Move your cursor to a point over any green section and click, you will open a new window zoomed in on the location where you clicked.  Again move your cursor over a green region, your cursor should turn red.  Click this section.

5.  The GEvo window should pop up now with all the information filled out for the section you just chose.  (you are preparing to take a close up look at the section you clicked on)

7.  You can now click on a red bar to see where the homologous gene is in the other organism and how much the gene has changed.

What you just did

Analogy:  Just like in Google Maps you saw an image of the entire human and chimpanzee genomes and zoomed in.  You zoomed in all the way to street view where you could see individual genes.  Potentially you could have zoomed in even further to see the individual nucleic acids.  But you didn't only zoom in, you zoomed in on homologous segments of DNA.

Biology you should learn from this

Syntentic dotplot:  Syntentic dotplots give biologists very valuable information about how organisms diverged from a common ancestor.  Biologists can easily look at one of these dotplots and see where large sections of DNA have been deleted, inserted, copied, or moved.  The dotplots are also very good at depicting how closely two organisms are related through the quantity and linearity of green dots over an entire genome.

-  Note: CoGe takes the syntentic dotplot one step further by connecting it to GEvo.  This makes analyzing any section of the dotplot very easy to do in tremendous detail.