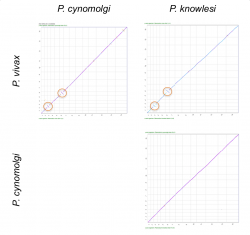 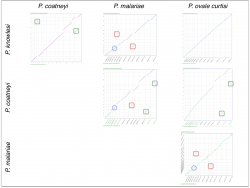 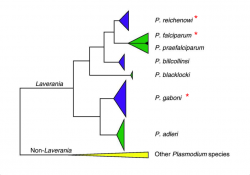 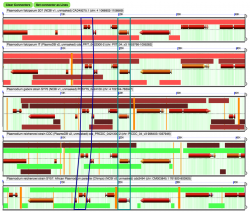 Changes in local genome organization can be used to ascertain the evolutionary history of a region (microsynteny). In Plasmodium, many genes related to parasite-host interactions are rapidly evolving and undergo frequent rearrangements, gain/loss events, and horizontal transfer. These evolutionary processes leave "genomic signals" by altering the local genome organization. Erythrocyte invasion is a multi-step process that represents one of the most crucial steps in the Plasmodium life cycle [12]. Recently, two P. falciparum genes (the reticulocyte-binding-like homologous protein 5 (Rh5) and the cysteine-rich protective antigen (CyRPA)) were shown to be the result of a horizontal gene transfer between P. faciparum and P. adleri progenitors within the . Remarkably, comparative genomics demonstrated that this horizontal gene transfer was localized to an 8kb segment on chromosome 4. The localized nature of this event, plus interspecific hybridization barriers suggest that the gene transfer occurred by the capture of a small segment of P. adleri progenitor genomic DNA by the P. falciparum progenitor within the Laveranian subgenus. As Rh5 and CyRPA are crucial for host erythrocyte invasion by P. falciparum, it has been proposed that the capture of these two genes conferred a strong fitness advantage that allowed the P. falciparum progenitor to infect humans [13]. In sum, the genomic region surrounding these two genes represents an excellent case study on how to examine microsyteny with CoGe.

Figure 4. The analysis shows a region of synteny loss between P. vivax (Salvador-1), P. vivax (PO1) and P. cynomolgi. Low quality segments are shown in orange. You can rerun the analysis following this link: https://genomevolution.org/r/mjjv

We performed a microsynteny analysis of the genome region containing Rh5 and CyRPA. The analysis was conducted using the five fully sequenced Laveranian genomes currently available: P. falciparum strains 3D7 and IT, P. reichenowi strains CDC and SY57, and P. gaboni strain SY75. Our results show that microsynteny is largely maintained in the regions surrounding Rh5 and CyRPA. We modified the Results Visualization Options tab to display background and wobble GC content for genes in this region. Neither background GC content across the region, nor wobble GC content for either Rh5 or CyRPA vary significantly (Figure 8). It has been proposed that significant changes in background or wobble GC content could be used as evidence of a horizontal transfer event. However, we did not observe such a pattern in our analyses. It is possible that a horizontal transfer event between ancestral Laveranian genomes might not be detected using this method due to the similar nucleotide composition of species in the subgenus. Therefore, an additional test might be required to further support the proposed horizontal transfer event.