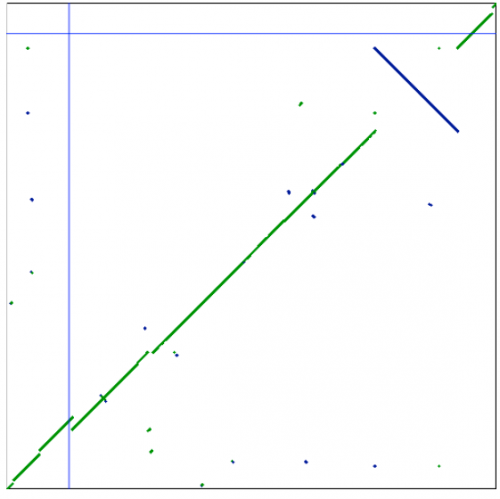 Syntenic dotplot generated by SynMap between two substrains of Escherichia coli K12, DH10B and W3110. Results can be regenerated at https://genomevolution.org/r/dfjw

SynMap allows you to generate a syntenic dotplot between two organisms and identify syntenic regions. This is done by:

If you choose, synonymous and non-synonymous site mutation data can be calculated for protein coding genes that are identified as syntenic. These genes will then be colored based on those values in the dotplot for rapid identification of different age-classes of syntenic regions.

It is easy to search and select organisms in SynMap. Just select the "select organisms" tab and search for two organisms by either name or Organism description. Just type part of either in the text box and SynMap automatically searches for any organism that contains your text. The results are displayed below the search boxes. Some organisms may have multiple versions of their genome and different types of sequences (e.g. masked versus unmasked). These will be displayed in a drop-down menu from which you can select the correct genome. Also, this is where you can select for comparing CDS sequence or genomic sequence. If the genome does not have CDS features, the option won't be displayed and a warning will be printed in below these drop-down menus. When selected, a brief description of the genome will be displayed below the drop-down menus. This will include the full organism name and description, followed by an overview of the genome. If you click on "Genome Information:" it will link to OrganismView and give you a full description of the genome. Otherwise, it will display source of the genome, the number of chromosomes in the genome, the total length of the genome in nucleotides, and whether the genome contains plasmids or Contigs.

QuotaAlign is a post-processing step to merge adjacent syntenic blocks, or select subset of syntenic blocks that reflect matching ratio of regions (for example, number of subgenomes in duplicated genomes). These two steps are essential for downstream analysis of genome rearrangements. Read more details on QuotaAlign.

This option is selected under the "SynMap Options" tab To select, just set the option "Calculate substitution rates for syntenic protein coding gene pairs and color syntenic dots accordingly" to what rate you desire:

Synonymous (Ks) and non-synonymous (Kn) site changes are calculated by:

Just press "Generate SynMap" when everything is configured. While SynMap runs, messages will be displayed as to the stage of the analysis that is being processed.

SynMap provides links to all the output files generated during its analysis. Most of the files are located in a box below the dotpot named "Links and Downloads".

These are the files that will be sent into DAGChainer to identify syntenic regions and gene pairs. Different files will be present depending on the options used in the analysis:

After a SynMap analysis completes, SynMap will return a link that will reload SynMap with the exact configuration of your analysis. This permits using that link to save in your notes, send to a collaborator, or publish. You can find this link under the "Links and Downloads" section of the results. It is a green button labeled "Regenerate this analysis: http://genomevolution.org/r/2o29". To copy this link, just right click on the button and choose to "copy link location". Otherwise, the shortened link will be sent to a URL detransmogifier, and will be expanded to a large link.

How do I sort the chromosomes by name instead of by size? 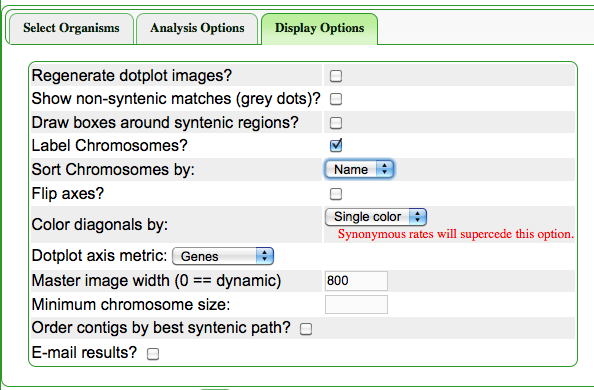