This 'cookbook' style document is meant to provide an introduction to many of our tools and services and is structured around a case study of investigating genome evolution of the malaria-causing Plasmodium spp. The small size and unique features of this pathogen's genome make it ideal for beginning to understand how our tools can be used to conduct comparative genomic analyses and uncover meaningful discoveries.

Through a number of example analyses, this guide will teach users about the following tools:

The study of parasitic genomes via comparative genomics offers many unique challenges. Parasite genomes are characterized by a combination of gene loss and the acquisition of species- or lineage-specific genes; in particular, many specialized genes mediate host–parasite interaction [1]. The dynamic nature of parasitic genomes is particularly evident within the genus Plasmodium. The genus emerged ~40 million years ago and harbors roughly 200 species of parasitic protozoa better known as malaria parasites. All Plasmodium species have a complex life cycle involving some kind of vertebrate host and a mosquito vector of the genus Anopheles (mammals) or Culex (birds). In addition, Plasmodium species share similar life cycle characteristics, albeit with a few exceptions (e.g. hypnozoites). However, host and vector preferences differ among Plasmodium species [2].

Plasmodium genomes are tiny (between 17-28Mb) in comparison to those of their vertebrate (1Gb for birds; 2-3Gb for mammals) and mosquito (230–284Mbp) hosts [3]. All Plasmodium genomes consist of fourteen chromosomes (nuclear genome), as well as a mitochondrial and apicoplast genome. Despite these shared genomic characteristics, the structural organization, gene content, and sequence of Plasmodium genomes is highly variably within the genus [4]. The exact origins and mechanisms of these differences remain largely unexplored, however, they are generally hypothesized to stem from host shift events [5][6].

An increase in funding devoted to malaria research has coincided with a dramatic increase in publicly available genomic information for Plasmodium [7]. The most prominent repository is found at NCBI/Genbank [8]; while additional and unique sequences can also be found on other databases: PlasmoDB [9], GeneDB [10], and MalAvi [11]. This wealth of genomic data facilitates detailed comparative genomic approaches, opening the possibility to:

Through a case study on Plasmodium evolution, we will illustrate how CoGe can be used for the analysis of multigene families, local synteny, and whole genome comparisons (genome composition, rearrangement events, and gene order conservation).

The following links direct to specific tools for the comparative analysis of Plasmodium genomes: 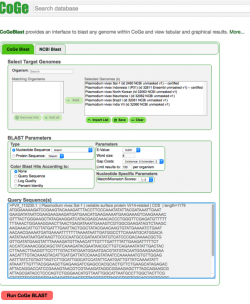 Figure 11. Screen capture of CoGeBLAST input. Genomes included in the analysis and the used query sequence are shown.

The identification of homology based on sequence similarity is a key tool for gaining insight into an organism’s biology and genetics. Defining evolutionary relationships and inferring common ancestry is particularly challenging when dealing with multigene families. Plasmodium multigene families perform a wide array of functions, have diverse gene organization, and distinct evolutionary histories. Here we focus on a set of multi-gene families arising from the subtelomere (e.g. var, stevor, rifin, or vir) that have very complex evolutionary patterns and organizations [12]. These four gene families are of particular interest because of their role in immune evasion and cell invasion. In addition, these families have undergone rapid sequence evolution and gene turnover [13][14][15]. These factors make inferring orthology/paralogy and gene gain/loss events in Plasmodium subtelomeric families a complex task.

The 313 members of P. vivax’s vir family are grouped into 10 subfamilies based on their sequence similarity. Gene size and structure (number of exons) is largely variable among family members [16][17][18]. The genetic diversity in the vir family is larger than that of other P. vivax families. Only fifteen of the 313 vir genes are shared across all sequenced P. vivax strains despite the recent emergence of the species ~ five million years ago. Within this group, PVX_113230 has been proposed as a potential family founder based on its high sequence conservation [19].

Here we use CoGeBLAST to identify the proposed founder of the Plasmodium vir family (PVX_113230) in six P. vivax strains (including the recently sequenced PO1 strain). CoGeBLAST incorporates genome visualization into BLAST analyses. Therefore, this tool facilitates the study of complex evolutionary patterns.

Figure 12. Screen capture of the genomic HSP visualization section of CoGeBLAST. Salvador-1 (left) and PO1 (right) are shown side by side. Analysis can be replicated following this link: https://genomevolution.org/r/mjg3

Sequences with significant similarity to PVX_113230 were found in all the evaluated P. vivax strains, including PO1. However, the number of high-scoring segment pairs for each P. vivax genome was variable. The highest number of sequence homologs was observed in the strains: Mauritania, PO1, and Salvador-1. Sequence divergence of vir members within P. vivax seems to affect the number of high-scoring segment pairs per strain. Thus, the variation in the number of HSPs across strains further supports observations about the high sequence variation among vir homologs.

The location of HSPs appears to be slightly variable across genomes. However, we cannot confirm this patterns until the Mauritania, North Korea, Brazil I, and India VII genomes are fully assembled. Between the two fully assembled P. vivax genomes (Salvador-1 and PO1), BLAST hits were located largely in the same chromosome regions (Figure 12). As expected, a higher number of BLAST hits and a more variable genome location were observed when a less conserved vir family member (PVX_096004.1) was used as a query (analysis can be run following this link: https://genomevolution.org/r/mkcg).

Figure 21. Screen capture of Synfind analysis output. Additional links to CoGe's analyses can be found under Links. Results can be replicated here: https://genomevolution.org/r/moya

The evolutionary trajectory of multigene families can be difficult to infer, especially in those with a scattered organization or rapid gene turnover. While this issue is particularly prevalent in species-specific gene families; genus-specific families can present intricate evolutionary patterns as well. One good example can be found in the SERA (serine repeat antigen) family, a gene family that has experienced a significant number of inter-specific contractions, expansions, and rearrangements. These patterns remain to be evaluated at an intra-specific level. We will use SynFind to study family's organization of SERA paralogs in 6 P. vivax strains.

SERA paralogs are expressed during various stages of the Plasmodium life cycle. All SERA family members encode proteins with a papain-like cysteine protease motif [20]. These motifs are commonly found both inside and outside the genus Plasmodium [21][22]. One member (SERA-5), expressed during late trophozoite and schizont stages, has been considered as a promising malaria vaccine target [23]. We will use this gene sequence as a query for the SynFind analysis. 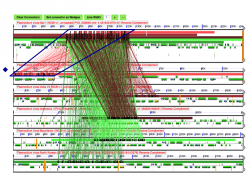 Figure 22. GEvo analysis using the Synfind output. The number of sequences and display order has been modified to include only the SERA family: PVX_003850 (Salvador-1, set as reference), PVP01_0417200.1 (P01), cds1276 (Brazil I), cds1241 (North Korea), cds1011 (India VII), and cds1227 (Mauritania). Connector lines show syntenic regions between SERA family members. Brazil I strain is marked with a blue diamond. Strain-specific changes on family's organization are highlighted with a blue parallelogram. Results can be replicated here: https://genomevolution.org/r/mpdf

We used Synfind to identify genes homologous to SERA-5 across 6 P. vivax genomes (Figure 21). Synfind’s output was used as a query for a GEvo analysis of the region. Our results show a conserved number of SERA paralogs in all P. vivax strains. The organization of the SERA family was different on the Brazil I strain respect to other P. vivax strains (Figure 22). Previous studies on SERA have suggested that some family members are unique to P. vivax and closely related species [24]. Our results indicate that family organization is not completely conserved on the intra-specific level. This is most evident on recently duplicated paralogs.

SynFind also identified matching segments outside the SERA multigene family. These segments belonged to hypothetical protein coding genes, ATP proteases, and uncharacterized transcripts. Papain-like cysteine protease motifs are commonly found outside both Plasmodium and the SERA family. Thus, is likely that these segments share a papain-like cysteine protease motif but are not evolutionarily related to SERA.

The number of available Plasmodium genomes has increased considerably during recent years. This wealth of genomic information creates an unprecedented opportunity to study the unique genomic qualities of this genus using comparative genomics.

The intricacies of parasite-host relations in Plasmodium infection might be more complex than previously considered [26]. Humans have recently been infected by Plasmodium species classically considered specific to non-human primates (e.g. a single infection with P. cynomolgi [27] and various infections with P. knowlesi [28]). In addition, african primates have been infected by unique P. falciparum strains (a parasite classically considered exclusive to humans) and are proposed to act as reservoirs for this parasite [29][30]. In bird Plasmodium, the putative evolutionary time of parasite-host associations has a significant role in the development of pathogenicity and in host mortality [31]. Finally, multiple host-switch events between largely divergent host types are thought to have occurred in bat Haemosporidia [32]. These cases highlight the complexity of the Plasmodium infection landscape. Insights into the unique patterns of Plasmodium biology, epidemiology, ecology, and genetics can be obtained from molecular and comparative genomic studies.

The rapid growth of genomic information makes implementing tools that facilitate assessing genome evolutionary trends an imperative task. The services and tools provided by the CoGe platform are of considerable use in advancing Plasmodium comparative genomics. Here, we showed how various CoGe tools could be used to assess evolutionary patterns unique to Plasmodium. We also showed how to use this platform to further characterize sequenced Plasmodium genomes. Overall, we have demonstrated that CoGe’s tools can be used to address evolutionary questions such as: