Objective:  To have you select a gene in one organism and find where that gene has moved to in another organism.  Also have you notice how much the gene has changed.

A human genome contains over 3 billion base pairs.  Now, if a scientist wants to compare portions of human DNA to a chimpanzee's DNA, which is also over 3 billion base pairs long, the scientist would need to use a computer program or the task would take hundreds of years.  This is where CoGe comes in.  CoGe can be used to quickly take a segment of a 3 billion base pair genome and find where that segment closely matches another genome.   This process uses an algorithm to do the search. BLAST (Basic Local Alignment Search Tool) is a very commonly used algorithm in genetics for these types of searches.  As you finish this lesson you will begin to understand how comparing genetic elements may be used to determine ancestry.


1.  Open OrganismView (quicklink) and search for the organism you want to have compared and select it.  For now, search "Escherichia coli strain" and select the first result

2.  Click Launch Genome Viewer in the bottom left corner to open a new window that visually depicts the genome

3.  Click the gene you want to have compared, for now select a random gene (Note: you'll probably want to zoom in to do this).

4.  Click on the link to the right of Location: in the Features window to open a new window that contains the DNA sequence of the gene (quicklink)

5.  Click CoGe Blast to open a new web page and to begin the blasting process (quicklink)

Part 2 - Blasting the gene to another genome

You should now be looking at a web page titled CoGeBlast.  The large box containing many A's, T's, C's, G's and N's shows the DNA sequence for the gene you previously selected (Note: the N's signify unsequenced DNA).  Now you need to find the entire genome of the other organism you want to compare this gene with.  To do this:

1.  Search for the organism you want to compare your gene with in the Organism Name search box and select it, for now search again for "Escherichia coli strain"


2.  Now you are going to compare your orginal gene with all of E. coli strains in the results screen.  Click the + Add all listed button under the search results screen

- Note:  you just added the original organism you chose to the list of genomes that will be blasted.  To remove it, select it in the Genomes to BLAST box then click - Remove 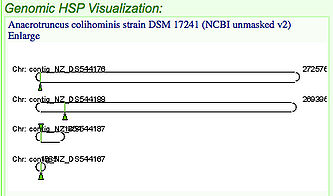 3.  Click Run CoGe Blast to compare the gene in the first organism you selected to the entire genome of all the other organisms you selected (quicklink)


4.  You just completed the blasting process

The results page contains a lot of information and one of the first things you'll notice is a picture like the one to the right. This picture shows the location of the similar genes that were found through the blast search by marking them with a green arrow.  In the picture to the right four similar genes were found on four different chromosomes and/or organisms.  The following steps will show you how to compare the locations of these genes to the location of the original gene you chose.

1.  Select the top box and any other box in the HSP Table (shown on the right) which has a quality near 97%

- Each row is a gene that was found to be similar by the BLAST and the quality tells us how closely the genes match.

2.  Click Go, located right underneath the table.  This will open a new window which displays information on the genes you just selected, ignore this information for now and click Run GEvo Analysis!


3.  The new window that opened displays your final result, two genomes one on top of the other with red bars to mark regions of these genomes that are similar to one another based on their DNA sequence.  The genes you selected are displayed as yellow arrows as opposed to the usual green.

Though this result may not seem amazing, the information you just acquired is extremely useful for biologists.  Biologists now know where the gene is located in the second organism, the yellow arrow, and how much the genomes have changed, as noted by the quality.

What you just did

2.  select a gene in this organism

3.  choose other organisms to which to compare that gene

4.  use an algorithm called BLAST to find the most similar genes in organisms you just selected to the gene you selected

5.  select the original gene and a blasted gene

Biology you should learn from this


Ortholog:  In genetics, an Ortholog is a special case of homology where genes in two different organisms have originated from a common ancestor. It is often assumed that orthologs have conserved the same function as the ancestoral gene, and hence have similar functions to one another.

Paralog: In genetics a Paralog is a special case of homology when a gene is duplicated within an organism.  For example the gene for Protein A is copied so now there are two genes for Protein A in the genome.  These genes are paralogs of one another.

Next Lecture:Synteny: Getting the Big Picture