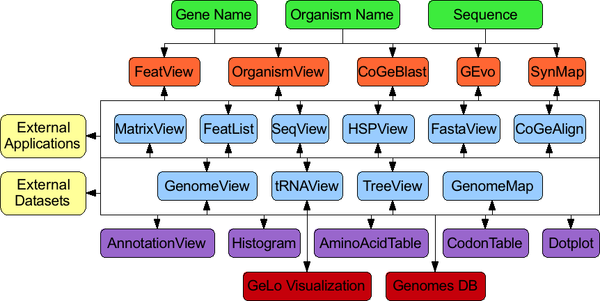 CoGe’s suite of web-based applications creates an open-ended analysis network. The interconnected nature of these tools (black lines and arrows) create an open-ended analysis network with no pre-defined beginning or end of an analysis. Each tool is specialized for a particular type of data or analysis, has its own web-application. Using a web-based framework for tool development inherently creates an method for the storage of analysis states so an analysis can be “saved” for future work. This also allows external tools and datasets to easily link into CoGe for many types of data and analyses. Green boxes are data types that researchers can use to begin an analysis. Orange boxes are applications that allow for direct user access. Blue boxes are internal applications that are accessed through another tool. Purple boxes are modules for web-tools for displaying specific types of data. Red boxes are core modules of CoGe. Yellow boxes are for resources outside of CoGe’s web-based framework. 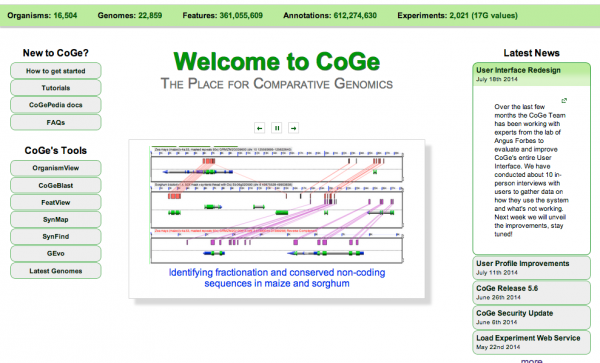 CoGe's web-tools have several applications for initiating an analysis.

Behind the scenes, CoGe has several interconnected web-tools. Since each tool performs a specific task (e.g. displaying a list of features, viewing a fasta sequence), tools are linked together to allow researches the ability to move through their analyses in a variety of ways. This allows scientific questions to drive the analysis as opposed to the tools driving the scientific questions. Also, as new things are discovered in an analysis giving rise to new questions, each hypothesis can be immediately tested by branching an analysis down a different path than originally intended.

Also, by using a web-based framework for CoGe's tool design, it is relatively easy: